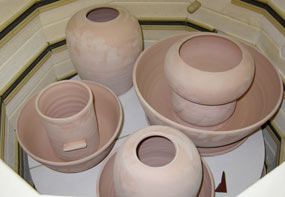 May was a busy month, mostly things not related to making pottery, so there wasn’t much to report. In the spare time I did carve out, I managed to throw enough pieces to constitute a bisque load. And this past weekend, I fired my first load of greenware.

It was a fairly full load, and took a little over 13 hours to run. The firing was monitored by the K.I.S.S. software.  It reported hitting 1823°F. The witness cone for cone 06 started to bend, but didn’t get quite enough heat. I think we need to make a thermocouple adjustment.

I’m still keeping Monday nights as studio time. Last night, I mixed up 3 glazes, and didn’t have enough time to unload the kiln. The pieces are safe and sound in the kiln, so they’ll sit there until next week.

Bottom line: this past weekend was another milestone in the studio, with my first load of bisque being fired. Next on the agenda will be a glazing session and a couple glaze firings. Then it’s back to throwing.