On Saturday morning, I got up early and headed for STARworks Ceramics in Star, NC. I was going there to participate in a workshop on throwing tall vases, taught by Jeff Dean, of Dean and Martin Pottery.

I arrived almost 45 minutes early, and found my way to the area where the workshop was to be held. STARworks Ceramics is a really huge sprawling space inside what was once a factory, probably part of NC’s once thriving textile industry.

After a few minutes wandering among palettes of prepared clay and bags of dry ceramic materials, I found Takuro Shibata, the Director and mastermind behind STARworks Ceramics – formulator of clays and glaze wizard, and a very nice guy. Takuro helped me find the workshop area and get settled. I had a few minutes to meet and talk with Tom Gray, a Seagrove area fixture. Tom and I talked about surfing at Emerald Isle long ago, which was a nice surprise.

When all eight of the workshop participants were ready, we started with a slide show of some of Jeff’s work. His tall pieces and shino glaze work were really nice – and provided inspiration for the day. We then got started, first wedging our clay, STARworks Okeeweemee cone 10 with grog. It’s been a while since I threw groggy clay, but it was great to work with and quite forgiving.

Our first effort was just to throw a single piece as tall as possible. Jeff demonstrated first, and I was interested to see how he opened much wider than the cylinder he would form. In no time he had a nice tall cylinder. I didn’t get quite so tall a cylinder, but I was pleased with the result which was tall for me. I learned a few things watching Jeff’s technique for opening and the first pull. I’ll definitely work on a similar approach. 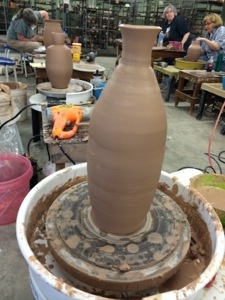 Next we threw a 2-piece form using a top-to-top method. We threw a base first I used a 4 pound piece of clay. The top edge was flattened toward the inside, a little more than a half inch, then grooved with the center f the groove centered over the center of the form wall. The top was thrown from 3 lbs. the shape was made keeping in mind that if would be inverted on top of the firs half. The top edge was formed in a V with the point up, and carefully matched to the diameter of the groove in the first piece. Then we dried the pieces. I used a heat gun. Some folks used a propane torch. This gave the pieces more rigidity to allow them to be joined. The clay was dried to the point where it no longer felt sticky. The pieces could also be allowed to dry overnight.

Once sufficiently dried, the two pieces are checked for fit, then joined by score and slip. The seam is smoothed out, then an opening is cut in the top to allow access to the interior, the thickness of the clay in the top will be lightly remoistened and pulled up into a neck. First, though the seam is smoothed from the inside and outside. Then back to the neck. I ended up with a nice tall bottle. I didn’t measure but I think it was about 18″ tall, a new record for me.

By this time, we were closing in on the end of the workshop. Jeff demonstrated making a bottom-to-top 2 piece form. It was a great exercise and was a lot of fun. Jeff did a great job.

It was fun meeting and talking with other potters and a nice change of scenery from my studio. A quick visit to the STARworks store was fun, too. Lots of great tools and supplies. I notices lots of raw materials for glazing, too. I found a comfortable rib of a shape I didn’t have (amazing), and then it was back on the road.

It was a very enjoyable trip. If you’re in the Seagrove, NC area, don’t miss a visit to STARworks. Next time I’m there, I’ll stop, and I plan to locate Jeff Dean’s “Dean and Martin Pottery”, as well as Tom Gray Pottery. So much to do, so little time.