Yesterday was a day off of sorts. But I got so much done, I suppose it doesn’t really count. In any case, I had a great time.

It started early with breakfast, then off to the studio to start the first glaze firing of 2013. Lots of bowls and a couple other fun items. I made another 3-piece lantern, of which the shadow cylinder cracked in bisque firing, which should be a nice addition to the patio. It will hold a solar light, or could be used with a candle or oil lamp. There’s also a big oval cassarole in the load. And some throwing ribs! I saw an article online about making your own ribs out of clay, so I gave it a shot. Looking forward to seeing everything.

There are also some glaze combo tests and a new test white glaze in this load. The white is “Mooncrater White“. Can’t wait to see how it comes out.

After getting the kiln and computer logging set up and running, I headed off to Wilmington, to pick up some new glaze and clay at Fat Cat. After a fun, brief visit with Mary and Sonny, and with a much heavier feeling car, it was back on the road to pick up some favorite groceries from Trader Joe’s. They have a few items we just can’t find elsewhere – very happy they’re as close as Wilmington. 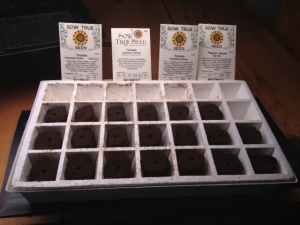 I found out that there’s an organic gardening center in Wilmington, Progressive Gardens. I decided, that if I had time, I’d stop by. As it turned out, I had time. I met Ryan and Erin, who helped me find the stuff I needed to get the seeds started for this years peppers and tomatoes, as well as some corn gluten for the lawn. The store was great. They had all the organic gardening stuff more traditional garden centers don’t. And the place wasn’t infested with garden ornaments. They even make and sell compost tea. With a sample of compost tea and a load of organic growing supplies, it was back to the car. And just about noon.

As it turns out Progressive Gardens is almost next door to the Salt Works. That made lunch plans easy. If you’re looking for a great breakfast or a lunch burger, you can’t go wrong at Salt Works. One time at breakfast, we even got a good fishing tip from our waitress. Very local. We like local.

Then it really was time to get back to Kinston. After getting back to town and dropping off some clay for a friend, and unloading at the studio, I felt like I’d already had a full day, but it was only 2:00pm! That meant I had time to set up the seed starter plugs on the heat mat and grow light. So, the tomato seeds, Cherokee Purple, Arkansas Traveler and Chadwick Cherry and pepper seeds found their home in some Quick Start Plugs. They should be ready for the garden in another 6-8 weeks. That makes waiting on a kiln to cool down seem speedy.

By the time I got the seeds set up, the kiln was getting close to it’s target temperature. It finished the ∆5 firing right on time. Everything seemed to be good, so I’m looking forward to checking it later today when it’s cool enough. I’ll post pictures.

The one thing I thought about last night was how much I managed to accomplish yesterday, and how well it all worked together. Some days, it doesn’t matter what one does, nothing goes smoothly or quickly. Other days, like yesterday, everything just falls into place without any apparent effort. You just have to enjoy them when they come along.

Today’s been pretty nice so far, too. I’ll just go with it. I hope you get a day off like this soon.

4 thoughts on “Pottery day off”